You are here: Home1 / Insider Information 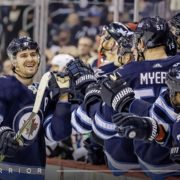 I’m sure that you’ve noticed the explosion of Warrior gear that has been taking over the league at an unprecedented pace. Having the likes of Mark Sheifele and Tyler Myers on board as well as having sticks in the hands of Leon Draisaitl in Edmonton and Johnny Gaudreau & Matt Tkachuk in Calgary have been amazing additions of A-list talent over the past few months.

I was recently connected with John Kirk – Pro Services Rep extraordinaire to get some insights as to how he goes about making such huge gains in such a short period of time.  Kirky takes care of the Jets, Flames, Oilers, Wild, Blues and Lightning officially, but he’s been at it so long and has so many great relationships with pro’s that he often takes calls from players from across the league. Going into the call, of course I wanted to know all of the inside scoop on what’s happening in the dressing rooms & who would be next to sign on – but I was also curious about the process of both signing new plays and keeping current ones satisfied and performing their best.

To put Kirky’s (and the pro team’s) accomplishments in the past year into perspective – their success would be the equivalent of literally DOUBLING the retail sales of an established company in one year, in a massively competitive and saturated market. There are only so many players in the NHL – so every time he signs a guy, he’s literally taking them away from one of the hockey business juggernauts.  Hmm… What’s in this dude’s secret sauce and how can I put a little bit of it into my every day?…

When I tracked Kirky down, he had just finished visiting the Jets in Minneapolis (where he calls home) on a game day. He didn’t have an appointment, and the Jets are pretty emphatic about reps not coming around on game days, but Blake Wheeler was having an issue with his sticks and he wanted to address it right away (Wheeler went on that night to score the GWG – his 200th career goal).

The following week, John was headed to Toronto, then across North America to San Jose and then to Vegas to see the Jets. I can only imagine what this dude’s airmiles account looks like… He says that he tries to see teams on the road as much as possible, so he’s not taking them away from family or other obligations when they’re at home so they have more time to spend with him. When visiting a team, it’s important for John to make sure that he touches base with every player on the Warrior roster – regardless of rank on the team’s depth chart – every time. The average visit with a player being 1-15 minutes. He says there are guys like Ryan Suter that tell him in the early going “If I like the stick and everything’s good, just keep rolling it & don’t change a thing. I’ll tell you know if something goes wrong” and hasn’t changed spec since he signed on more than a year ago. But there are also guys that want to chat pretty much every time they see him – so there are times with a deep team like the Jets where he’s mobbed by 3-4 players at a time after practice.

When he gets to the room, he usually pops open his laptop so he can take notes to copy & paste to be sent to the factory for spec changes (rather than writing down & re-typing). For each team visit, he prepares a checklist of players to see and specific questions & follow-up for each guy. I was amazed when he said he has record of EVERY SPEC, every tweak he has made for every one of his huge list of players that he has worked with since he started with Warrior almost 10 years ago. For example, he said a player like Blake Wheeler (who he would consider very reasonable from a spec change perspective) would have 29 or 30 different spec sets on file. He says he used to write everything down and/or email himself, but his new system is much more efficient.

One of the biggest factors that stacks the deck in Kirky’s favor is the fact that Warrior is is the only manufacturer that still produces pro (and some retail) product in North America. With our main research & development office in San Diego and the production facility a mere 20 minutes across the border in Tijuana, Warrrior can be more flexible & much faster than the competition. As you might know, the sticks that the pro guys use are based on the same core technologies as the sticks that are available at retail, but the pro’s have a huge menu of custom options available to them and it’s up to John & the pro team to recommend options and fit the players for their weapons. Not having to rely on production that’s an ocean away is “absolutely huge” as Kirky would put it.

Kirky told a story about Tyler Johnson getting injured during the 2015 Stanley Cup Final. He wasn’t hurt bad enough to come out, but his injury prevented him from being able to make his standard flex perform. Warrior was able to get him new, softer sticks in 3 days – in time for the next game. He says it’s stories of service like that that have started to get talked about in NHL dressing rooms to the point where this past summer, Jason, Mike & Mark from the Jets equipment staff took the time to travel down & visit both our R & D facility and Tijuana plant.  Kirky mentioned that having them visit the plant impressed them with how many hands actually touch each stick before it leaves the plant, but also with the attention to detail that goes into every step. Warrior’s reputation in the NHL, and particularly with the Jets has become “Not only a company that can do things quicker than other companies, but we’re also better caretakers of the things that need to be handled after the fact”.

Mark Sheifele is one of the newest of Kirky’s converts and by all accounts he’s “over the top happy”. John says that the culture within the Warrior pro team is such that “a lot of times, once a player comes on board, they feel like they’re a Warrior player, they’re part of the family, and they take pride in that”. By the sounds of things, Sheifele got the ear of Matt Tkachuk when training together with Gary Roberts this summer and gets a “huge assist” in having Tkachuk try Warrior product. Kirky says that Sheifele is always trying to get his few non-Warrior teammates to try the new T-8 (Alpha Sabre Taper) – his favorite line being “It’s outa control!”. Having sales guys like Sheifele & Wheeler (also two-thirds of arguably the hottest line in hockey right now) as sales people in a room as busy as the Jets one when he’s “dancing at 30 different weddings at the same time” (this guy is a quote machine!) is huge. “I’m a good salesman, but a player who loves our stuff & is on fire is a MUCH better salesman than me!”

When asked what it’s like to work with a player like Byfuglien, Kirky was quick: “Buff’s awesome – I love that guy!  Half the time we just talk about fishing…”. When asked about some of the changes in product that we saw on the ice last year, he said (favorite quote alert…) “Is everything gonna be moonlight and canoes all the time? Absolutely not!  There are going to be periods where a player isn’t feeling our product at a point in time, or isn’t producing the way they want to for whatever reason & we’ve gotta be there to answer the bell. Has Buff tried other stuff? Yup! Has Wheeler tried other stuff? Yes. But you know what – at the end of the day, they come back to us because they know that WE’Re gonna take care of them.”

As much as Buff might have a reputation for being a bit of a product “tinkerer”, Kirky sees it differently: “He thinks of it more as – I want to have the best tool in my hands. Last year, Buff tried out a litany of one-piece sticks – from all brands and this summer he called me and said he just wanted to go back to a 2-piece stick”.  Knowing that both Buff & Zdeno Chara have had some pretty great success with 2-piece sticks, I asked if there was any reason that we tend to fit big, strong guys in a 2-piece? He couldn’t put his finger on it: “there’s just something about the way our stick connects that tends to kick better for those guys”.

From what I can tell, the success that Warrior has been experiencing in the Show is built on a solid foundation of good old hard work and salesmanship. And let’s be clear, Kirky’s job is sales. The days of a rep showing up in an NHL dressing room with a suitcase full of cash are long over (not that those days have ever existed in the Warrior world).  It’s very clear that he legitimately cares about every player on the Warrior roster and wants to do everything in his extensive bag of tricks to help those players succeed. The amount of time he spends on the road is the stuff of legends “Better to hear “sh** – you again” than “sh**, where have you been””.

A couple of summers ago, Kirky was good enough to set us up with Blake Wheeler to do an autograph session in conjunction with a stick launch at retail. Wheeler showed up an hour early on what we didn’t realize at the time was his BIRTHDAY! He sat & signed autographs that afternoon until there was no-one left in line. I’ll never forget that, as I was trying to thank him for showing up on his birthday and doing such an awesome job with all of the fans, he cut me off with a big smile & said “Man – anything for Kirky”. No wonder Warrior is blowing up in the show…